In a GIS, data can be represented in two main different formats (Korte 2001)[1]. The first format, raster, defines a matrix of points. In each cell, a numerical code is defined. This code, usually a real number, can represent different kinds of geographical data, such as elevations and terrain properties. The second format, vector, defines a set of vectors that represent geographical data. This format comes closer to the natural representation of geographical data on paper. Figure 1 explains how reality is represented using these two alternatives. Vector data is shown on the left and raster data is shown on the right. 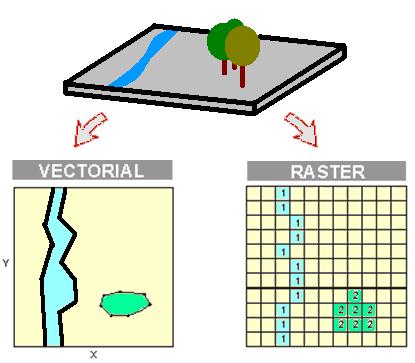 Figure 1: Raster and vector layers of a GIS.

Using a cellular automata to use GIS data in a model is not a new concept. Studies in this area can be reviewed in Benenson and Torrens (2004) and Fonseca and Casanovas (2004).

The nexts sections describe the different elements needed for this use and the data used in the simulation engine. A wildfire model using this approach is presented as an example. This example can be reviewed in the projects section and is based on Rothermel's mathematical model (Rothermel 1972, 1983).

This section classify the different structures used as layers in the simulation model in this study (Fonseca and Casanovas et al. 2004).

Some 3DObjects are integrated with a GPS. As a result, simulators can implement training systems. Elements can be located in the real world and be placed in the model, and hence the implications of their locations or actions can be determined.

Table 1: Integration of layers with GPS.

Virtual reality helps represent landscapes, theoretically more realistically than any other technology. It helps represent not only visual landscapes but also computer data. Virtual reality stores the physical structures of a landscape and the simulator uses those physical structures to enable interaction with landscape elements. This also makes it possible to perform active queries on the outdoor simulation model.

In recent years, the main providers of GIS tools have developed several techniques for improving data representation, especially in 3D. Some only show a static 3D view, while others allow a 3D view with navigation, free flying or recorded animation over the data representation. In our approach, we use virtual reality techniques (using VRML 2.0 as the standard representation language; see Andrea L. Ames (2000)) to enable powerful interaction with the various model elements. Obviously, the GIS data must be prepared and converted to VRML and sensors, scripts for dynamic behavior and other functionalities based on External Authoring Interface (EAI) must be added.

In our wildfire implementation, for instance, the GIS stores the data that represents the landscape – basically the DEM model and the vegetation structure – in virtual reality format. Through this representation, the simulation model knows the configuration of the terrain and can facilitate interaction between it and the various model elements. The difference between a virtual DEM representation and a simple DEM is the interaction. A virtual DEM representation enables interaction between one or more users and the landscape. These users can navigate the virtual landscape, respecting certain rules such as collision detection and gravity, which can be defined in the virtual representation of a DEM but are never defined in a DEM. These rules are useful because the simulator needs not only the structure of the landscape but also the most important rules applied to it (gravity, collision detection, lights, etc.). These rules help define the relationship between the simulation model and the landscape.

Data can be converted from GIS to virtual reality using specific tools such as VirtualLands© (Figure 2). This tool works with several of the most common GIS file formats (shape, raster, DEM, etc.) and converts them to analogous layers in VRML, exports data to LeanSim® file formats and builds a VRML file that contains all the information needed to simulate or query the GIS data in a 3D view. 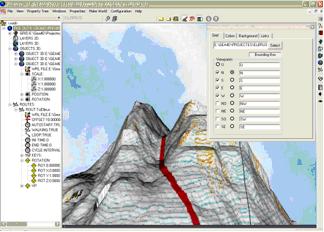 The main purpose of VirtualLands is to generate virtual cartography (based on the VRML format), but it also structures data in layers[2] by type and makes it possible to interact with certain layers or individual objects. VirtualLands can also construct queries that can be executed while this data is being represented; the answers are also represented in virtual reality format. The various elements represented in a virtual landscape may behave differently in the real world; hence, they behave differently in the simulation model. These structures may be the common structures of 2D cartography or certain other structures characteristic of virtual cartography. These structures are all organized in layers, which can be added over a DEM.
[1] Although vectorial and raster formats are the main family formats that SIG data can use other models exists, for instance the fuzzy sets, that can be used to represent geographical entities with imprecisely defined boundaries. A work, as an example of fuzzy data use in SIG is (Guo 2006). Additional non-spatial data can be represented in a SIG. To manage this data a great number of data models have been proposed, such as flat data structure, hierarchical, network, relational, and object-oriented models. A convenient classification of GIS data models in three categories can be: file processing, hybrid, and extended or integrated DBMS (Malczewski 1999).
[2] Layers organize GIS data. Each layer adds new information that can be shown in a map. The first layer is usually the digital terrain model (DTM), which contains elevation information. Other layers may include rivers, territorial divisions, roads, etc.
[3] No implementation for the representation of polygons in the 3-dimensional space has been done. Anyway, a possibility to implement that can be using 3D vectors (in that case, 3DLayer can be vectorial too) or using voxels (in that case in a position two elements can be).
[4] External authoring interface